I love ALL things miniature.  I’m not sure why, but I do.  Maybe because I am only 5’ tall?  A subconscious bonding with things that are small?

I came across a pic of a miniature piñata and immediately knew I had to try it.  It was just one of those things that called my name and I was more than happy to answer.  I was looking for some fun things to send my youngest triplet daughter who is on staff at a Christian camp this summer, and this looked like a super cute idea.

After I decided I was going to make one, I found several blogs that had ideas to help me bring my mini piñata to life.

I had all the supplies for this project on hand, so there was nothing really stopping from getting my creative action on!

You will need a cereal box, or other similar box

Some tissue or crepe paper.  I saved some tissue paper that came in a gift bag.  It was a little wrinkly but for this project, it was perfect!

The pattern for my piñata came from, A Blackbird’s Epiphany.  More thoughts on that in a minute.

Other items needed are tape, glue and scissors.

Just before I had it completely closed up, I put in a couple of pennies, a small Hello Kitty rock that I had painted and a bottle cap.  It was more for the sound effects than anything.  If she does decide to bust it open I wanted at least a couple of little things inside.

Once I went completely around and taped the two sides together with the strip I was ready to add the tissue paper part.

It’s at this point where I was kind of thinking that this didn’t really look like a donkey so much as a dog.  The legs are a little chunky but I had already cut and taped everything so I figured that there was no going back now.

I cut several strips of tissue paper and then cut those to make a fringe.  I did not know this but they actually make fringe scissors!  Who knew?  They are actually quite inexpensive but since I don’t own a pair, I cut my fringe the old fashioned way. 😉 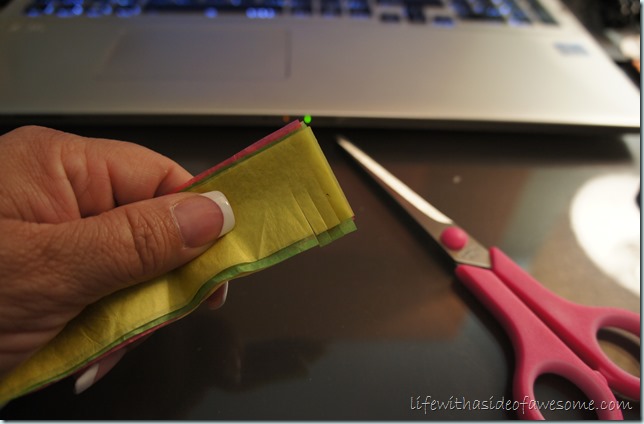 Once I had all the fringe pieces ready to go, I started gluing it on, section by section.

Continue that process until your piñata is completely covered.

Now…we can be completely honest with each, right?  I mean we are friends after all.

This is my finished piñata.  It is *supposed* to be a donkey.  But I think it looks more like some sort of colorful sheep dog or something.  So I guess I will tell folks that it is a sheep dog piñata!  Yeah, that’s it!!  That way folks will think that it was supposed to turn out this way!! 😉

For my first attempt at making a piñata, I was pretty pleased with the results.  Next time, if I try to make another donkey, I’ll look for a little bit different pattern.  I actually plan on making another and *hopefully* it will resemble what it is supposed to look like.  We shall see!

Have you tried to create anything different lately?  I’d love to hear about it.