Is a tutorial really necessary?  Probably not, but I’ll do one anyway. 😉

For this project you need some buttons in the color(s) you would like to use.  I also used some seashells and some beads.  I would suggest looking in the clearance area as well as the jewelry making aisle.  Don’t limit yourself to just buttons!  🙂  One of the next projects on my list is making another letter but using wine corks instead of buttons.  The key is to have fun with it!

You also need a wooden letter.  Because I was planning on using white/pale buttons, I chose a white letter.  You could always paint the letter a different base color as it will show through in spots.  The letters go on sale often enough but I usually wait until they are NOT on sale so I can use a coupon and get it for even less than when it is on sale.

A glue gun and possibly some snippers to cut off the back of some of the buttons so they lay flat.

And yeah, that’s pretty much it.

I didn’t want my buttons to have to uniform of a look about them so I started by gluing them in different areas.  Because some of the buttons were small, and because I don’t like burning myself with hot glue, I put a dab of glue directly on the letter instead of on the back of the button. 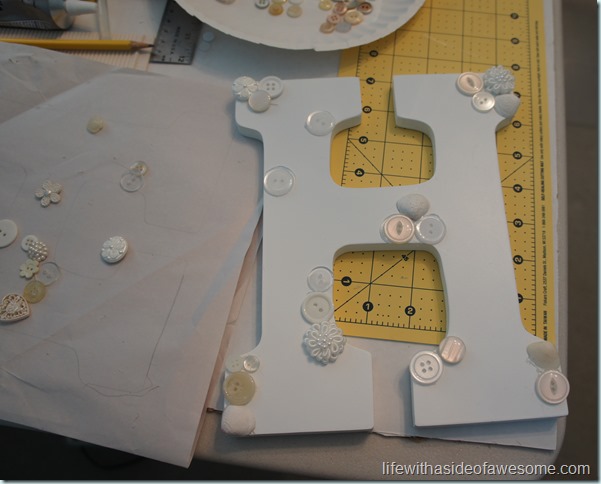 I kept adding buttons and trying to make it look a little random.  You can glue them however you would like.  Some may want a more uniform look to the way they are glued on. 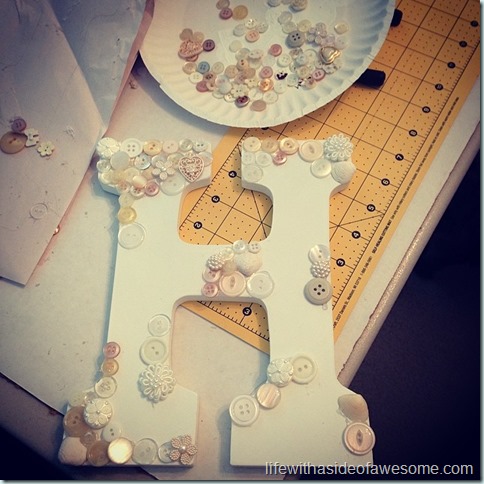 I really thought I had plenty of buttons but I actually ran out before the project was complete.

After a quick stop at my local craft store, I had enough buttons to finish my project.

See?  A pretty easy peasy project!  Let me know if you have tried this or a variation of it!