We got an early start to our day as we wanted to make sure and get a good spot on the Good Morning America show so we could be seen on tv.  I mean who knows?  This could be my lucky break!  😉

We arrived around 6am and the barricade that you stand around was almost full.  We got the last two front row spots.

This is, and would be, our point of view for the next 3 hours.

You can see Robin Roberts on the camera…. ::squeeeeee::

We are getting closer to something happening!!

We didn’t know it until they came out but Neon Trees was there!

We were so close!! 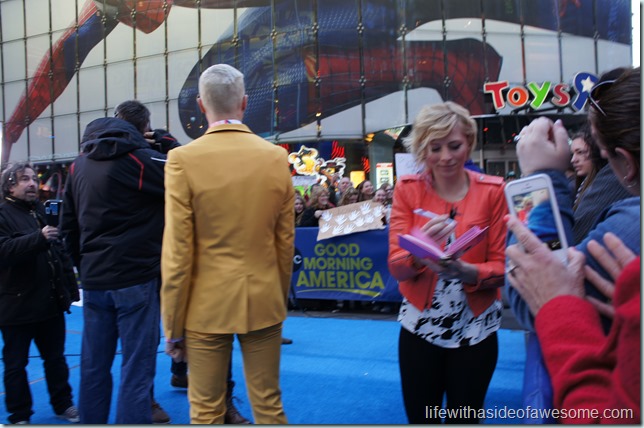 I love seeing “behind the scenes” things happening. 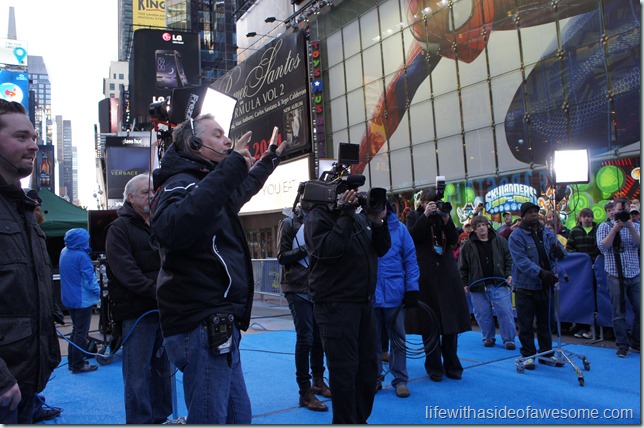 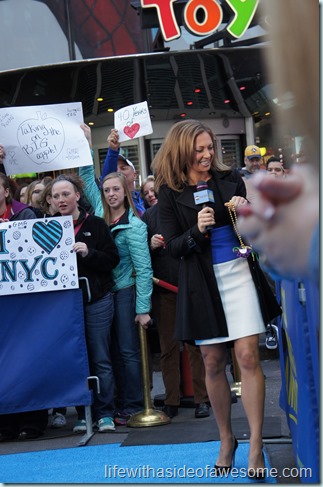 This guy was the audience coordinator by day, actor by night. 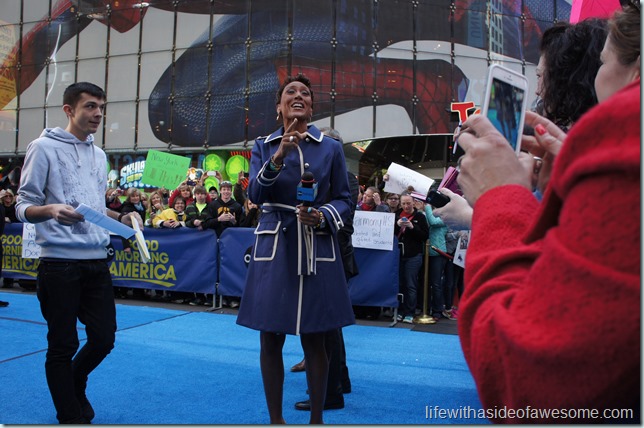 And my hubby got a great pic with Robin!!!  I was so excited!

I was up close and personal with Ginger!

And of course we told all of our family and friends that we were going to be on tv.  Several friends taped the show and sent us screen shots of when we were on.

Here we are on the right with me waving at the camera and Marvin holding his, “It’s my birthday” sign. 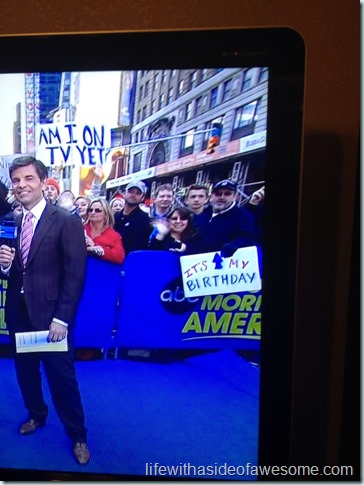 Marvin had moved aside to let the lady on my left get an autograph.  And then she wouldn’t move to let him back in so I did my best to wave and was just hoping he would be on tv again too.  And there he is in the back!!  Can you see him?

I have no idea why I am waving so wildly at the camera. 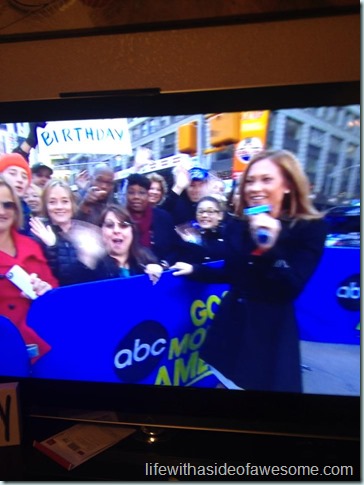 In these next shots I am holding onto the barricade for dear life and I don’t know why!  haha!!

Notice the pen in my hand?  Like I’m going to take notes or something??  Honestly, I had the pen out because some of the cast had signed our sign. 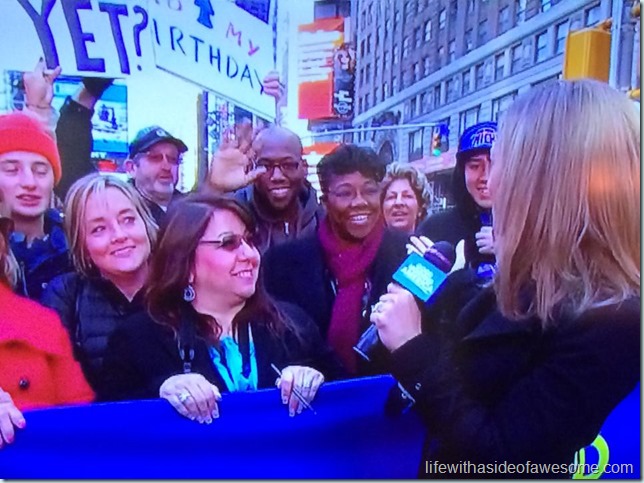 Again with the wildly waving hand.

And the infamous pen used by the cast to sign our poster.  Yes, that’s an orange piece of paper with my name written on it.  I used to use that pen at work and that helped it from walking off as pens so often do.

Here’s our poster.  Please excuse my messy craft desk in the background. 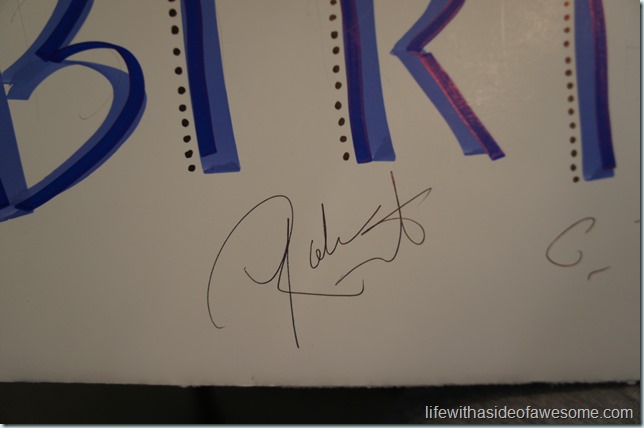 And an autograph from George Stephanopoulos. 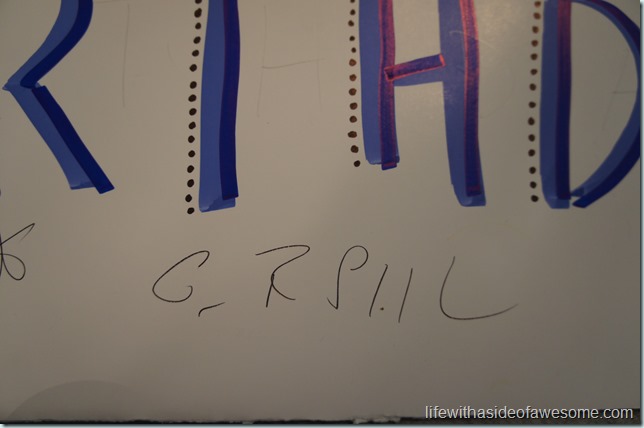 I had researched a bit about watching GMA live and I read that you could tour the studio.  Apparently, that was not current info but I didn’t know it at the time so I asked the door attendant where the tour was.  He indicated that we just needed to go around to the doors on the side of the building and ask there so we headed that way.

We turned the corner and they had it partially blocked off.  A celebrity,Sofía Vergara, was exiting the building and we had to wait.  I was able to snap a pic so that was cool! 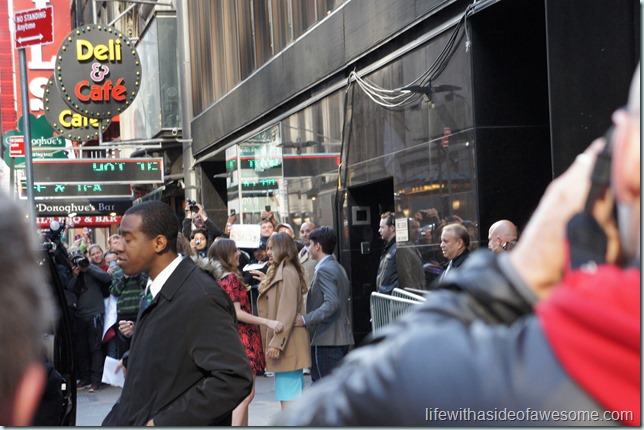 We found out that tours were no longer available, however, they did allow us to join a group that were going in to be on a segment of GMA Live!  Here’s the clip of that show:
CLICK HERE >> GMA Live

If you are heading to NYC and would like to see GMA and try to be on tv then CLICK HERE.

We had a super fun time even though it was a bit chilly out *AND* we were able to meet some of the cast, get on tv and get a couple of autographs!!