And it was pretty good.

We definitely either wanted to try Katz’s Deli or Carnegie Deli.  We didn’t necessarily have a preference but a scene from, “When Harry Met Sally” was filmed at Katz’s Deli so that won out.

Here are some shots of the inside.

It was definitely crowded and lots of customers coming in and just picking up food to go.

Very close to our table was this pic of Mike Logan and Lennie Briscoe.  Yes, I know that is their name on the show and they are just actors but that’s how I know them.

So the waitress comes up to the table and said, and I quote, “Whaddya want?”.  And that’s how she took our order…haha!!  We asked about the pastrami sandwich and since we’d never had one she brought us a sample.  She let us know that one sandwich was more than enough to share so that’s what we ordered.  At $18.75 for one sandwich I sure hope it was big.

That’s just my half of the sandwich!!  Loaded with meat…actually a little too much meat but it definitely filled us up.

On our way out I had to take a pic of “Where Harry Met Sally”.  In case you aren’t familiar with the scene, CLICK HERE.

I also saw some vintage looking signs on the way out.

I’m curious to know what liver puffs are.  I may have to google that. 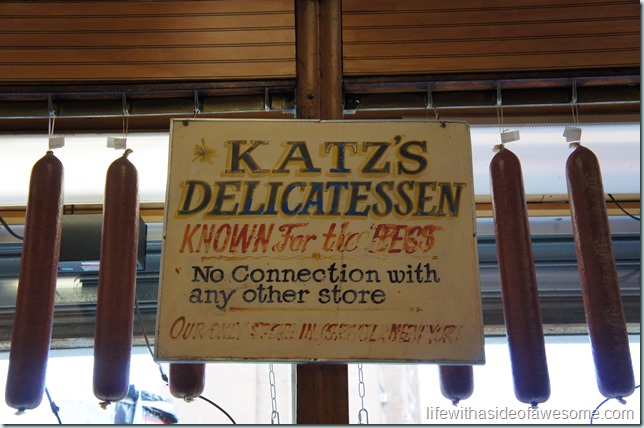 Not sure what the “No Connection with any other store” means but I’ll assume there is some drama and you can just save that for your mama.

Back to the blue ticket that we were told to hang onto.

Apparently it had something to do with paying for our meal as this was written on the back. 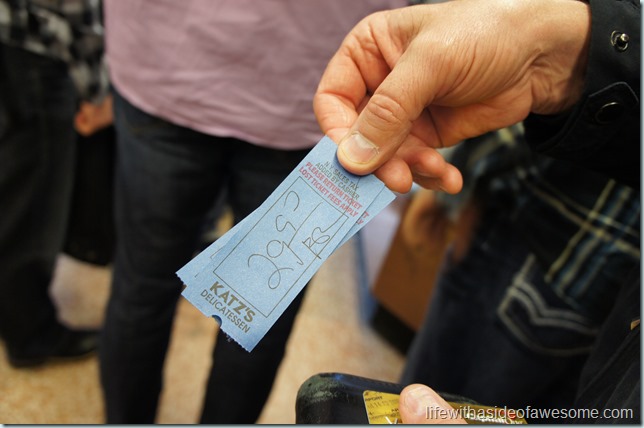 And a super important thing to note is they only take cash!

After our meal we decided to try and find a place to have a cannoli.  We found a quiet little place and shared a vanilla and a chocolate one.

And yes, they were yummy.

Have you ever been?  What did you order?  Did you have what she had?  😉