One of the cool places that we came across was the Old Post Office. 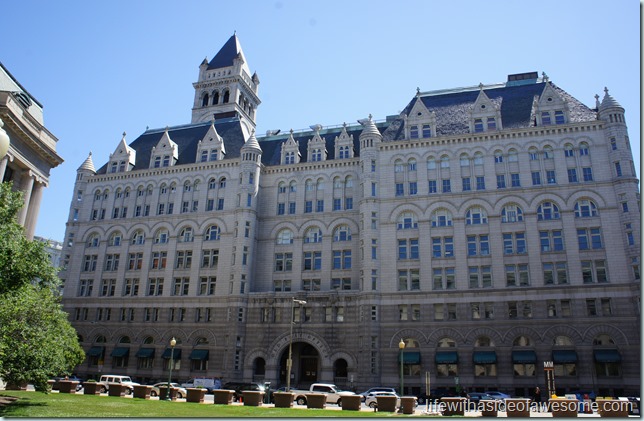 As I have mentioned before, Marvin had just retired from the Post Office so this was of course a place we had to stop and explore. 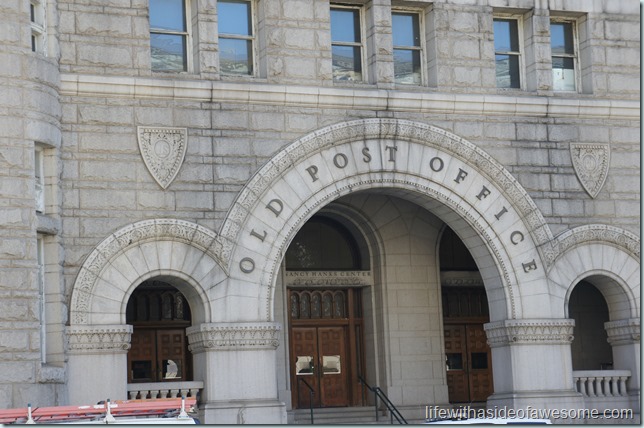 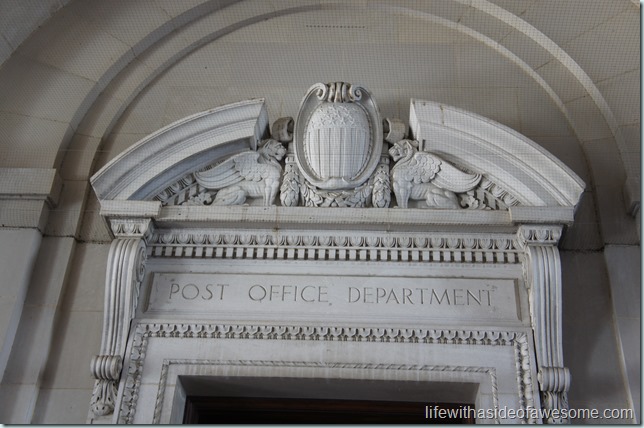 According to their website, “Originally built in 1899, The Old Post Office Pavilion embodied the modern spirit that was sweeping the country. Today, our architecture and spirit of innovation continues to evolve and thrive.

Once the first government building to have its own electric power plant, today we continue to electrify — with the help of The DC Preservation League. And, thanks to forward-thinking people, you can now stroll through The Old Post Office Pavilion and experience both its glamorous past and fun-filled present with international food, eclectic shopping and musical events … All designed to entertain lunch, mid-day and after work audiences all week long.”

So once inside you realize it’s not like a postal museum or anything although they did have some things to look at.  It does have shops etc. and you can go up into the tower which we did.

Now I know I’m not the only person that this happens to but glass elevators freak me out a bit.   It’s like you are too close to the edge or something.  Things could happen.  That involve falling and stuff.

Despite my fears we rode the elevator up. 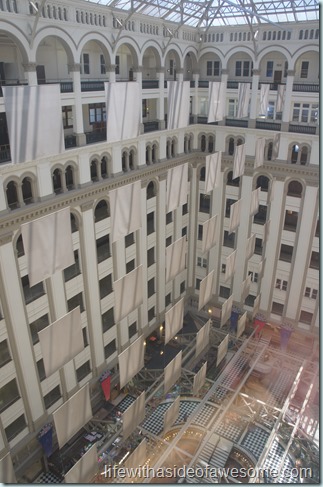 As you enter the bell tower area there is a plaque above a window.  I love the peeling paint and the brick being revealed behind it. 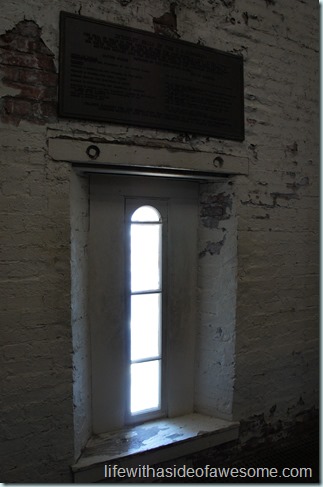 Here is what the plaque says: 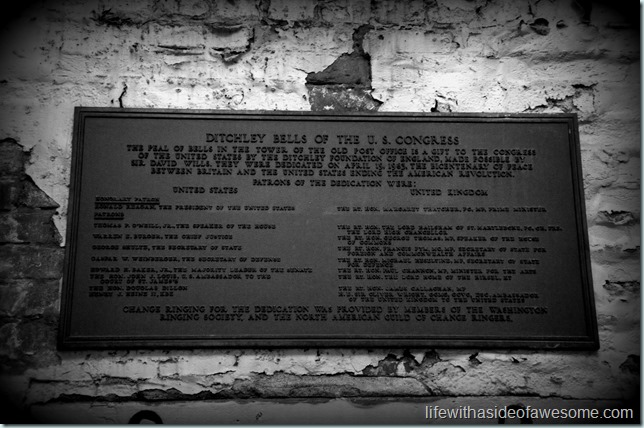 One of the bells up close. 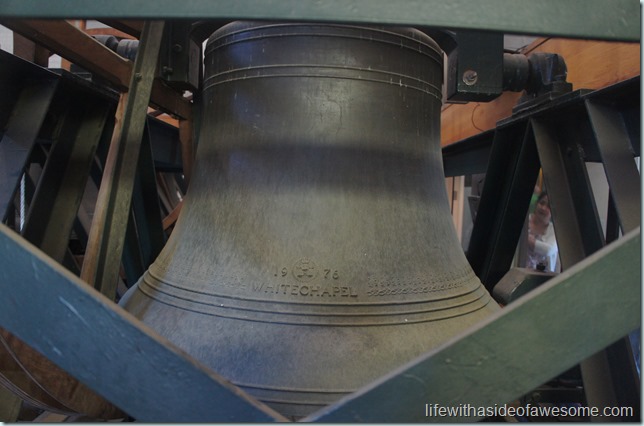 In honor of our nation’s bicentennial in 1976, the private Ditchley Foundation of Great Britain presented a set of English change ringing bells to Congress. In April 1983, the bells found a permanent home in the Old Post Office clock tower. They were dedicated as an everlasting symbol of friendship between the two nations.

The 10 Congress Bells range from 581 to 2,953 pounds and are replicas of the bells in London’s Westminster Abbey. They were made at Whitechapel Foundry which had cast the Abbey’s bells four centuries earlier. The bells are in the key of D major.

The practice of change ringing combines the disciplines of art and science to produce a unique form of music. Change ringing involves continuously changing the order in which the bells strike. The method of producing these changes is precise and requires extensive training, practice and concentration.

A full peal, which is a continuous performance that takes up to three and a half hours to complete, is rung in honor of the opening and closing of Congress and on state occasions, including all national holidays. To achieve this feat, the tower hosts a weekly practice session for the bells’ stewards, members of the Washington Ringing Society of the North American Guild of Change Ringers. 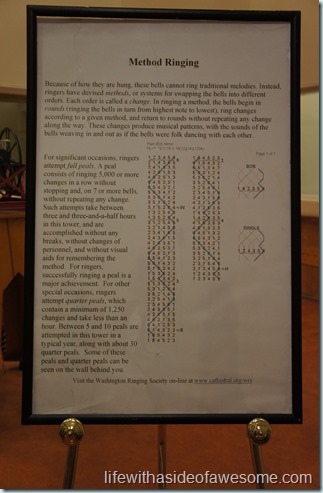 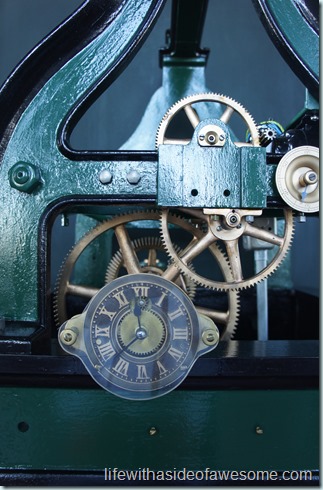 The views from the tower were awesome.  Love looking around the city from there.

We could see the Washington Monument which was under construction at the time we were there. 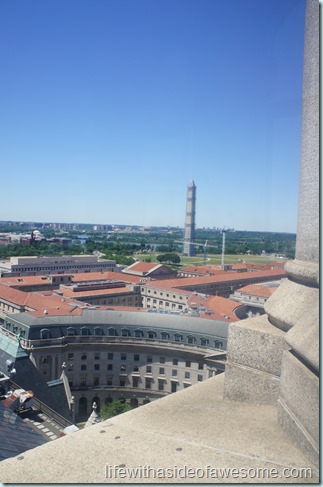 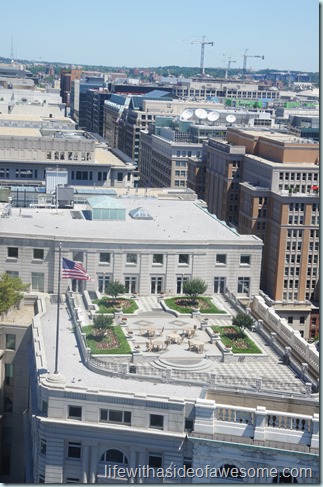 You may have thought that I was trying to take a pic of the Capitol in the distance but you are wrong.  It took me a bit but I was able to take this awesome close up of the wires.  😉 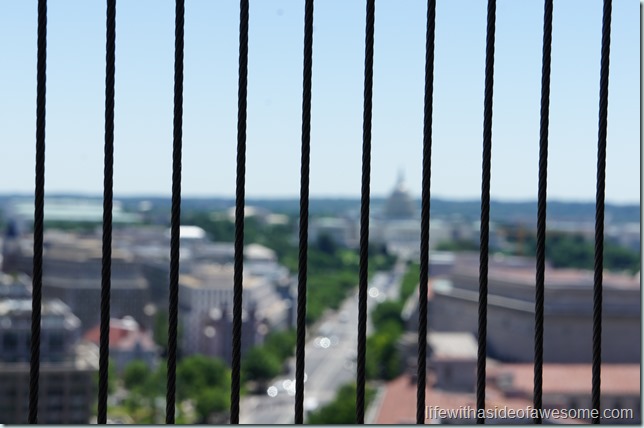 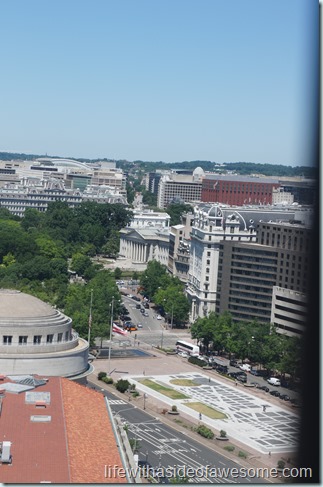 They did have some items on display.  Here’s a “vintage” mail bag. 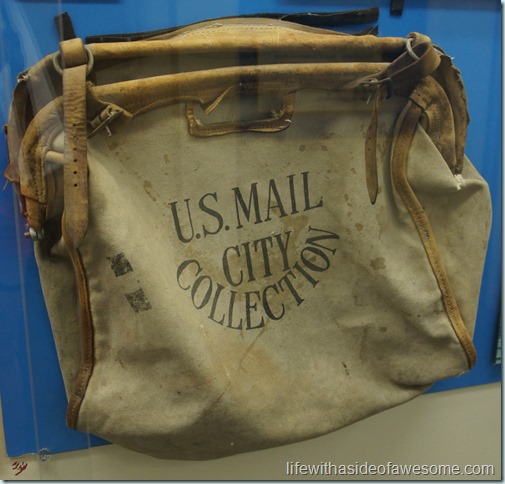 Some first day of issue items. 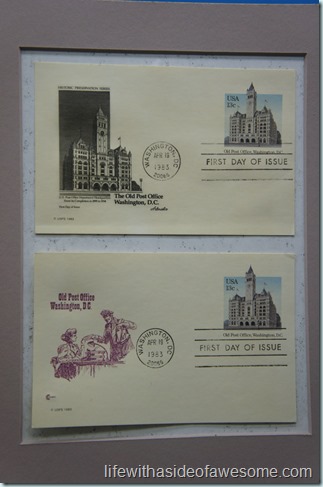 And as we were leaving I gave this sign a H!GH 5 for being awesome!  Seriously, I don’t know if they give you tickets for walking to fast or something in DC but I didn’t want to find out. 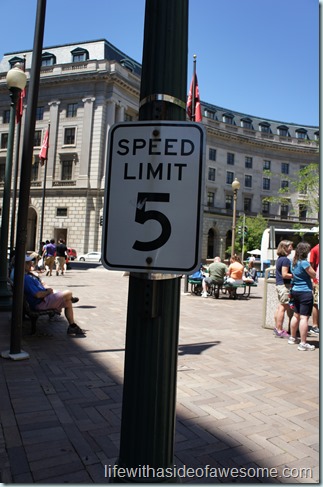