Dinner at Sardi’s and some Times Square fun

We freshened up and headed out the door to Sardi’s for dinner.

As we arrived we spotted our very first NYPD car!  Not quite the same as what the Law & Order characters drive but close enough!

If you notice there is some “stuff” right outside the car door.  The cop was eating sunflower seeds and throwing the shells out the window.  I’m pretty sure that’s littering and I should have made a citizen’s arrest, right?

Also on the way we saw steam coming out of the manhole covers.  May not be exciting to y’all but I’d never seen that and thought it was cool.

We arrived at Sardi’s early for our reservation but they went ahead and seated us.  I recommend making a reservation as seating, especially before and after the shows, fills up fast.

In the heart of New York’s Theater District, Sardi’s has been the toast of Broadway for 90 years. Located at 234 West 44th Street the restaurant is open Tuesday through Sunday for lunch and dinner. Late supper is served from Tuesday through Saturday. 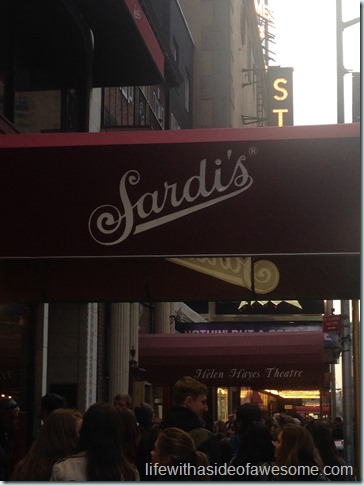 Here I am in front of some of the caricatures that cover the walls.

And a shot of my handsome hubby.

One thing that I remembered from my younger days was that Kermit the Frog was in the movie, The Muppets Take Manhattan and there is a scene that was filmed in Sardi’s.  Kermit the Frog is portrayed as a mustachioed Broadway producer and he took down Liza Minnelli’s caricature and replaced it with his own.  Here’s the scene: Kermit in Sardi’s

They still have the caricature up and it’s located upstairs near the restroom.

Who knows who this caricature is of?

For those that are interested, I consider the price of food in NYC to be a bit on the expensive side.  Our dinner at Sardi’s for two entrees, 2 sodas and 2 desserts came to $98 including tip.  Notice we did not have any adult beverages and it was still high!  It was our first night in NYC, we knew going in that Sardi’s was a bit expensive so we decided to splurge a little.

After dinner we went off to explore Times Square for a bit. 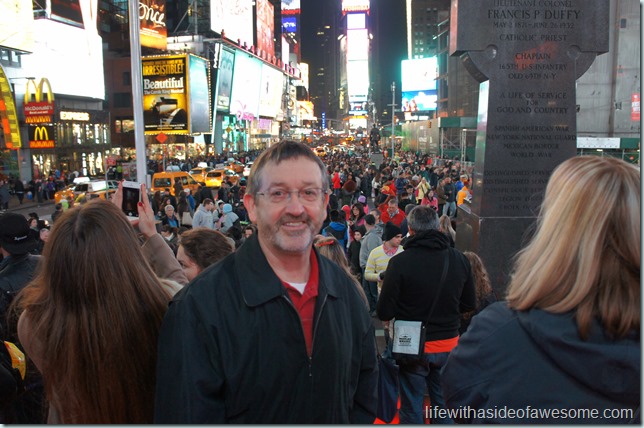 We actually made it up on the jumbotron!

That’s us in the center at the very back of the crowd.  The guy in the green jacket is to our right in the pic.

Remember when I mentioned “characters” on Times Square?  Well, we ran into my favorite, Cookie Monster, and I took a pic with him!  I knew they expected a tip so as my husband reached to get it Cookie Monster says a $5 or $10 will do…say WHAT??  FIVE or TEN DOLLARS??  Are you crazy?  I don’t think so scooter.  We gave him $2 and thanked him for his time.  I get that they are trying to make some money but c’mon.

We were having a blast!